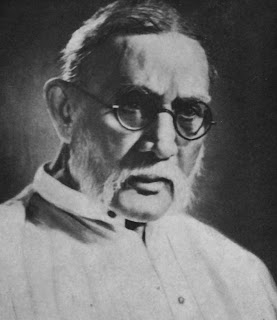 
Alladiya Khan (Hindi: अल्लादिया ख़ान) (1855 – 1946) was an Indian classical singer, known as "Gaan Samraat" (Emperor of Music). Khan founded the Jaipur-Atrauli gharana based on the Daghor bani. He is also recognized for his revival and creations of many ragas.

Alladiya Khan was born in Rajasthan in a family of musicians. Though his father Kwaja Ahmed Khan died early in Alladiya's life, his uncle, Jehangir Khan , taught him dhrupad for 5 years and then khyal for another 8 years.

Alladiya Khan served in the court of various kings of Rajasthan including that of Amlata. He sung so well and so much for the kings that he nearly lost his voice due to hours of riyaaz (practice). While trying to regain his voice he developed a new and profound style of singing by which he could sing without compromising the purity of raga but the passage, taans, and creativity of singing the raga. Later he settled down in Kolhapur as the court musician of the local king, Shahu Maharaj. In 1922 he moved to Mumbai after the king died. With his distinguished reputation, Ustad Alladiya Khan became a gem among the many masters in Mumbai. He taught many disciples and sung in many mehfils in Mumbai to which his reputation as an academic grew.
His autobiography, as narrated to his grandson Azizzudin Khan Sahab, is available in English translation, as My Life, translated with and introduction by Amlan Dasgupta and Urmila Bhirdikar, published by Thema, Kolkata, 2000

Repetoire:
Alladiya Khan was acknowledged for his creation and resurrection of many complex Raags such as Nat Kamod, Nat Bilawal, SampoornaMalkauns, Basanti Kedar, Bhupeshwari, and many more.
Many of these Raags were originally created and sung by the Havelis in northern Rajasthan, where Khansahab grew up. Hearing the Haveli sangeet Khansahab took many of the Raag-based Bhajans (either taking the Raag or Bhajan) and created Raags and Bandishes with them. One of the Raags he resurrected was Raag Basanti Kanada. Few of the many Haveli sangeet dhrupads which he made into bandishes were the famous Raag Nayaki Kanada Bandish "Mero Piya Rasiya" and Bihagda Bandish "Ye Pyaari pag hole".

Students:
Khansahab's most principle disciples were his younger brother, Ustad Haider Khan and his own sons, Ustad Manji Khansahab and Ustad Bhurji Khansahab. Khansahab's brother helped grow the Jaipur-Atrauli Gharana after Khansahab's demise. Ustad Manji Khan, the first son, died early in 1937, so it was Ustad Bhurji Khan, the youngest son, who passed on the Gayaki of his father to others worthy of it.
Apart from family, Khansahab's initial disciples were Sarangiya Ustad Abdul Majid Khan, Bhaskarbuwa Bakhale, and Wamanrao Sadolikar, and in succeeding generation came proteges like, Mallikarjun Mansur and Mogubai Kurdikar,Shruti Sadolikar.
In Mumbai, Alladiya Khan saheb's prime disciples were Kesarbai Kerkar, Mogubai Kurdikar and Nivruttibuwa Sarnaik.

Legacy:
The Annual Ustad Alladiya Khan Music Festival is celebrated in Mumbai every year, where several singers and musicians perform, giving homage to Khan. In 2005, the 150th birth anniversary of the musical legend was celebrated
In 2007, the story of 'Ustad Alladiya Khan', and his noted disciple, Kesarbai Kerkar, was the subject of Namita Devidayal's acclaimed debut book, The Music Room.
Posted by Nazarahmed Khan (Admin) at 12:10 AM

Dear,
the book My life has been out of stock for ages now, i feel it is our moral duty to make this book available for the love of Khansahib.

Thanks for the visit...
I shall post Articles from "My Life" for my website readers..
visit again and tell othres about my site...

Nazarahmed Khan(Aashu)
Hello friends, I have created this blog to share all information about Ustad Alladiya khansaheb and about our family. I am grandson of Ustad Azizuddin khansaheb(Baba) Thanks for the visit. Please visit again